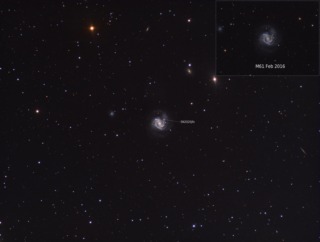 Messier 61 is a barred spiral galaxy located in Virgo, and part of the Virgo galaxy cluster. M61 is roughly the same size as our galaxy and is classified as a starburst galaxy that is undergoing a high rate of star formation. On May 6, supernova 2020jfo was discovered in the galaxy making it one of seven that has happened in this galaxy that has been observed this century. 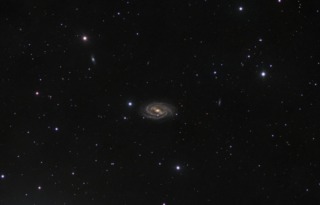 Messier 109 is a barred spiral located in Ursa Major, and the brightest galaxy of the M109 galaxy group. It has a radius of around 90,000 light years and contains an estimated 1 trillion stars. Charles Messier made note of the nebula, but it wasn't included in his original catalog. M104 through M110 were added later by other astronomers. Many distant background galaxies are in this view. 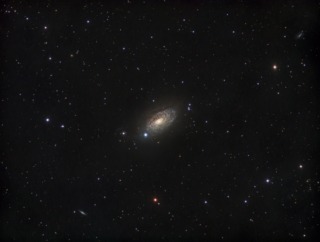 Messier 63, also called the Sunflower Galaxy is a spiral galaxy located in Canes Venatici. While the galaxy only has two major spiral arms, they are patchy and wrapped around the core forming what is called a flocculent type spiral galaxy. It is a prominent member of the M51 galaxy group.

Many distant background galaxies are also present in the image.

Discovered by Pierre Mechain in 1779, and added by Charles Messier to his catalog. 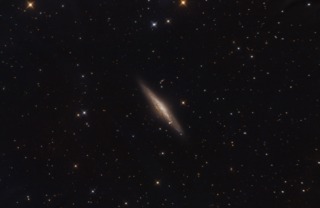 NGC 2683 is a nearly edge on spiral galaxy, with a possible barred structure. Located in Lynx, and lies approximately 25 million light years away. 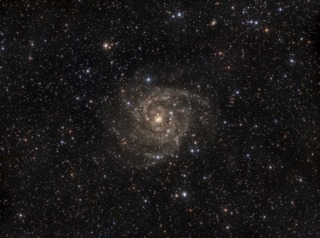 IC 342, sometimes called the Hidden Galaxy because it is heavily obscured by dust since it lies in the direction of the galactic equator of our Milky Way galaxy. Without that, it would be one of the brighter galaxies in our night sky. 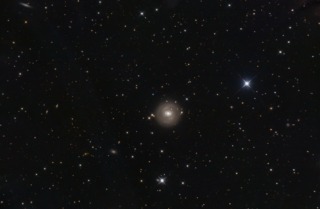