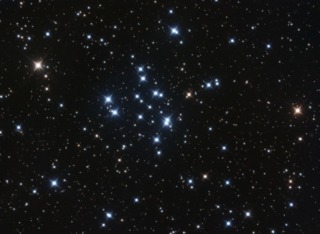 One classification of open clusters is the Trumpler classification. It consists of 3 parameters, the first is the degree of concentration.

The second parameter is the range of brightness.

1 - Most of the cluster stars are nearly the same apparent brightness.
2 - A medium range of brightness between the stars in the cluster.
3 - Cluster is composed of bright and faint stars.

The last parameter categorizes the number of stars in the cluster.

If the cluster any type of nebulosity, the letter "n" is added to the last parameter.

First up is Messier 34, located in the constellation of Perseus. Consisting of over 100 stars, in a space of a diameter of 14 light years. It is some 1,500 light years distance and shines at an apparent magnitude of 5.5 at an estimated age of 200 million years. 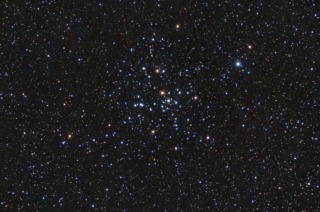 Messier 41 is an open cluster located in Canis Major near Sirius. The cluster contains some 100 members in a diameter of 25 light years. Estimated age of the cluster is around 200 million years. It is expected to remain as a cluster for 500 million years before dispersing. Brightest of the stars is an orange giant near the cent of the cluster. K3 type star, it has a magnitude of 6.3 and is 700 times more luminous than our Sun. 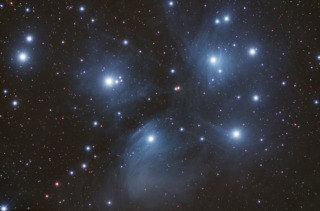 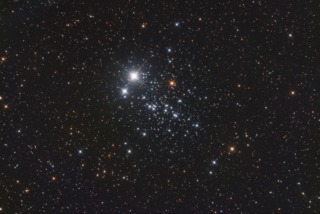 NGC 457 is an open cluster located in Cassiopeia, often called the Owl cluster, or a more recently the E.T. cluster with the two brightest stars forming eyes. I tend to see it more as an Owl. The cluster contains some 150 members and has an estimated age of around 21 million years. Less than idea weather for imaging, with a thin cirrus clouds, but a good bright target for commissioning the RC 10 scope and the ZWO 2600 mono camera. 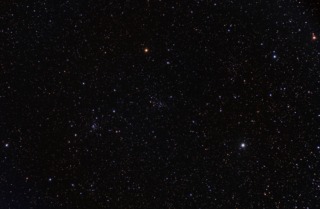 NGC 7790, center of image is a young open cluster located in Cassiopeia with an estimated age of 60 to 80 million years. Open cluster NGC 7788 lies to the lower left of NGC 7790