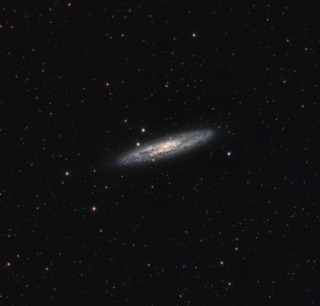 NGC 253 or often called the Silver Dollar Galaxy is dominated by it's dust patterns. Discovered by Caroline Herschel in 1783, it is one of the brighter galaxies visible. NGC 253 is a member of the Sculptor Group of galaxies, one of the nearer galaxy groups. Only one supernova has been detected in NGC 253 so far. 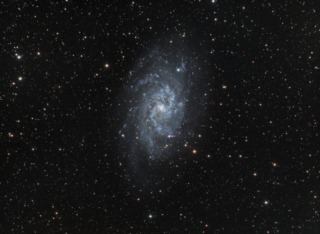 Messier 33, or also called the Triangulum Galaxy, is a spiral galaxy located in the constellation of Triangulum. Sometimes it is referred to as the Pinwheel galaxy, but that name is more associated with Messier 101.  It is a member of the Local Group of galaxies and is possibly a satellite galaxy of Andromeda. The galaxy contains several large H II regions of molecular clouds visible as pinkish-red regions. It lies at distance of about 3 million light years away, and is home to an estimated 40 billion stars.

Imaged with the ED80cft refractor and ZWO 1600MMC mono camera.

Dwarf spherical galaxies are not the most photogenic of galaxies, but sometimes I like to image stuff off the beaten track to see what I can find.

I was able to track down and identify some of the globular clusters that surround this galaxy. One of these, FJJ-VI was originally classified as a globular, but later studies by Hubble point to it being a distant elliptical galaxy. The color is noticeable much more reddish. FJJ-II is listed at 19.7 magnitude in the visual band. 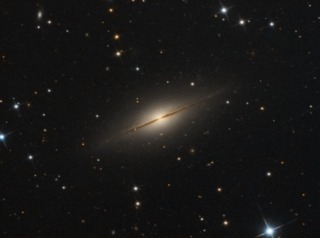 NGC 7814 is a galaxy located in the constellation of Pegasus.It resembles the more well know M104 Sombrero galaxy, but due to its increased distance, appears dimmer and smaller. It is located at an estimated distance of 40 million lightyears. Several even more distant galaxies can be seen in the image. 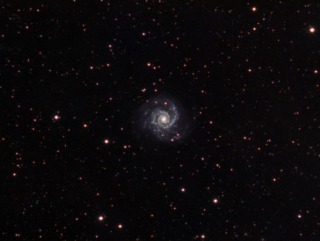 Messier 74 with its two distinct spiral arms presents a face on view of a "grand design spiral" Sc galaxy. Located in the constellation of Pisces at a distance of 30 million light years, the galaxy contains some 100 billion stars.

Discovered by Pierre Mechain in 1780, he reported it to Charles Messier to be included in his catalog.

Primary member of the small M74 galaxy group, three supernovas have been observed in the galaxy.

Image taken with the 80 mm refractor, and a monochrome ccd camera. 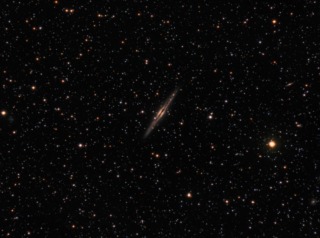 NGC 891 is a spiral galaxy located in the constellation of Andromeda.

From our viewpoint it is edge on. It is thought that this is how our Milky Way galaxy would look from that angle, being similar to our galaxy. Interesting enough, our galaxy would be mostly invisible to anything in that galaxy due to the amount of dust and gas from looking through the thick sections of the spiral arms. Most galaxies that we can see are located above or below our own galaxy.