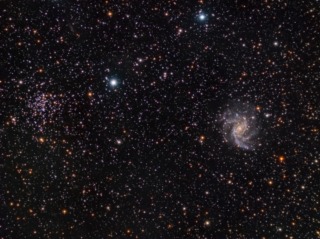 On the left we have NGC 6939, an open cluster located in the rich star fields of the constellation of Cepheus. It lies at an estimated distance of 3860 light years.

On the right, is NGC 6946, an intermediate spiral galaxy. It is often called the Fireworks Galaxy. Despite being a third smaller than the Milky Way galaxy, it has had a high rate of supernovas in the last century. Nine recorded supernovas, where as the Milky Way averages one per century. It is located at a distance of 18 to 22 million light years away.

Imaged with the ED80CFT refractor, and Atik 314L+ mono ccd. 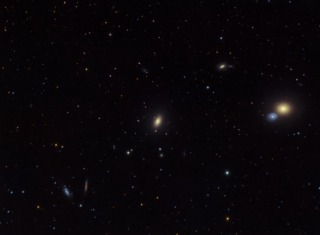 M59 is an elliptical galaxy located in the Virgo Super Cluster at 60 million light years distance. At a maximum width of 90,000 light years, its one of the larger ellipticals, but still smaller than the more massive M87 at 120,000 light years width. M59 is also home to 1400+ globular clusters. 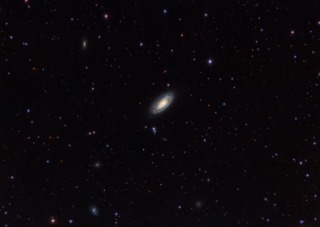 M88 is a Sc spiral galaxy about 60 million light-years away in the constellation Coma Berenices. Part of the Virgo super cluster of galaxies. Cataloged by Charles Messier on March 18th, 1781. 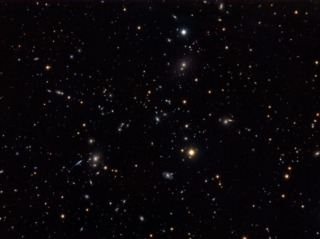 Abell 1367 is a galaxy cluster located in the constellation of Leo. Located at a distance of 300 million light years, it contains an estimated 70 to 100+ galaxies. Along with the Coma cluster and other galaxies it forms the Coma super cluster, which is part of a larger structure called the Great Wall that stretches hundreds of millions of light years.

The image consists of 300 and 600 second exposures through L/R/G/B filters over several few and far between clear nights with the ED80CFT refractor, and an Atik 314L+ mono ccd camera. Total integration time was 10+ hours.