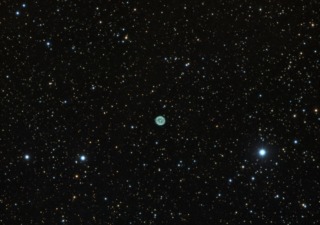 Sometimes called the Oyster Nebula, NGC 1501 is a planetary nebula located in Camelopardalis (The Giraffe). The central star shed its outer layers and those layers are now illuminated by the central star. The central star is also reported to be a pulsating variable star with an extremely short period of brightness changes. 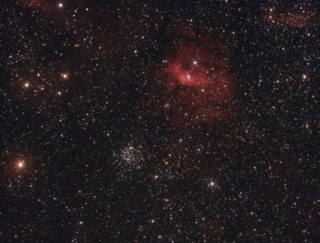 The Bubble Nebula or NGC 7635 is an hydrogen emission nebula with a bubble structure that is formed by stellar wind from a massive central star. Also in the field of view is the open cluster of Messier 52. M 52 is at a distance of 4,600 light years and the Bubble Nebula is a more distant 7,000 to 11,000 light years away. 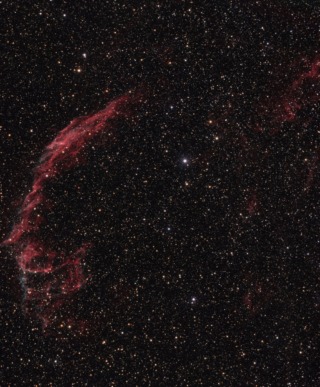 NGC6992, or Eastern Veil Nebula, is the eastern part of a supernova remnant of a star that went supernova about 8,000 years ago. The whole object is around the diameter of 6 full Moons. Shock waves create the delicate looking structures as they encounter interstellar gas and dust. 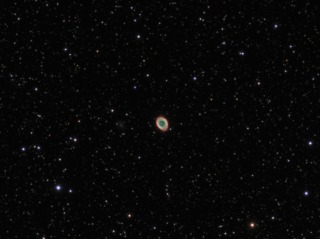 Messier 57 is a planetary nebula located in the constellation of Lyra. Often referred to as the Ring nebula as it resembles a small ring visually in a telescope. A planetary nebula is formed when a star in the latter stages of its life swells up into a red giant phase and the outer layers are expelled into the surrounding space as the star contracts down to a white dwarf. The ionizing radiation causes the surrounding gas to fluoresce.

Imaged with the ES127 refractor and the Atik314L+ mono camera. 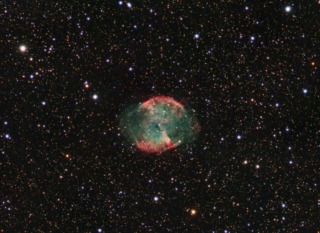 Messier 27 or commonly called the Dumbbell Nebula or Apple Core nebula due to its appearance visually through a telescope. It is a planetary nebula which is a misnomer as it has nothing to do with planets. It is formed as a star enters it's last stages of its life as the outer layers swell out and before they dissipate out into space. The surrounding layers are ionized by the remaining hot core. The remains of the star eventually contract down into a white dwarf to slowly cool over the eons. The central white dwarf is one of the largest known white dwarfs. The estimated age of the nebula is around 14,600 years. 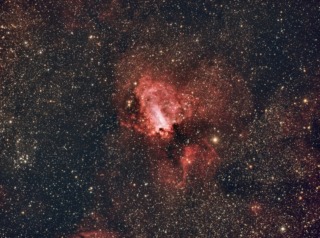 Messier 17 or often called the Omega nebula or Swan nebula due to its appearance visually in a telescope. A massive nebula and star forming region located in the constellation of Sagittarius with the dense cluster of stars of the Milky Way Galaxy in the background. The nebula spans some 15 light years in diameter and lies at a distance of some 5000+ light years. It is similar to the more famous Orion nebula.