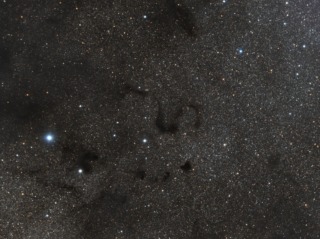 Barnard 72 is a dark nebula located in the constellation of Ophiuchus. Often called the Snake Nebula, the thicker regions of gas and dust blot out the light from the background stars of the Milky Way Galaxy. Several other dark nebula are visible in the image. 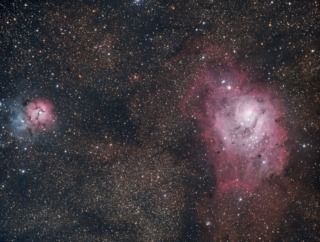 The Trifid Nebula (M20) and the Lagoon Nebula (M8) against the backdrop of the summer Milky Way Galaxy. The Trifid is a combination of an emission nebula, the reddish glow, a dark nebula, the dark areas in the nebula and a reflection nebula, the blueish area. The red emission is caused by hot massive stars in the nebula ionizing the surrounding cloud causing it to glow. The dark areas are thicker concentrations of the nebula that block light from behind it. The blue parts is caused by light from the hot massive blueish stars reflecting off of the dust grains.

The Lagoon nebula is primary an emission nebula but it has thicker concentrations of material in it. The small dark ones are referred to as Bok globules which are collapsing areas of the nebula. Both nebulae contain new and protostars forming out of the surrounding regions. 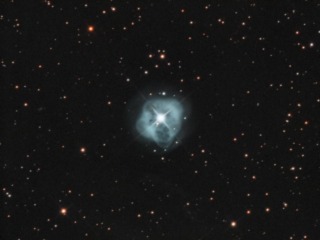 NGC 1514 is often called the Crystal Ball Nebula. It is a planetary nebula located in the constellation of Taurus. Discovered by William Herschel in 1790, it caused him to rethink the idea that nebulosity is just unresolved stars. The nebula is formed by a tightly bound pair of dying stars that are expelling their outer layers. 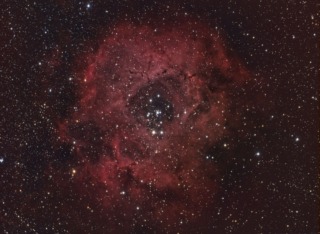 The Rosetta Nebula, also known as Cadwell 49, and sometimes referred to as NGC 2244, although that actually refers to the open cluster in the nebula. The nebula is located in the constellation of Monoceros at a distance of 5,200 lightyears. 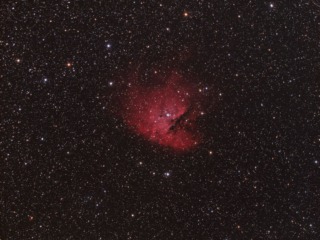 Also known as IC 11, or Sh2-184, and is occasionally referred to as the Pacman nebula due to its resemblance to the Pacman game's main character. The surrounding gas and dust is ionized by the open cluster IC 1590 which gives it a reddish glow. Several darker clumps can be seen which are called Bok globules. NGC 281 lies some 9500 light years away in the constellation of Cassiopeia. It was first noted by E. E. Barnard. 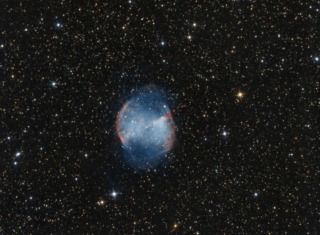 Messier 27 is often called the Dumbbell Nebula or Apple Core Nebula because of the brighter lobes on each side of it. It is located in the constellation of Vulpecula, at a distance of 1300 light years.

M27 is a planetary nebula which is a bit of a misnomer since it has nothing to do with planets. The first ones discovered looked a bit like planetary systems, but planetary nebula are created when a dieing star casts off its outer layers after a star's red giant phase. The nebula is made to glow from ionizing radiation from the remains of the star core which shrinks down to form a white dwarf.

Messier 27 was the first planetary nebula cataloged by Charles Messier.