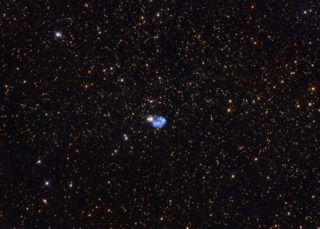 NGC 7008 is a planetary nebula located in Cygnus. it is sometimes called the Fetus Nebula. The shell is unusual in that it appears to have two different shells. One possibility that it was a binary star system with two different shells formed from each of the stars as each star with through the same red giant phase. 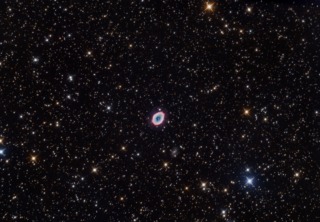 M57 also called the Ring Nebula is a planetary nebula (planetary nebula have nothing to do with planets). They are formed when a star near the end of its evolutionary life expels its outer layers as it shrinks down to the white dwarf stage. The planetary nebula name comes from the early days when nebula such as this looked like planetary disks to the early observers. 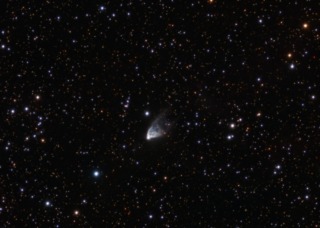 NGC 2261 - Hubble's Variable Nebula. Patterns in the nebula vary over time probably due to dust clouds that cover the star R Monocerotis at the tip are casting shadows on the illuminated nebula. Located in the constellation of Monoceros. It is at a distance of 2,500 light years away. The star R Monocerotis is a T Tauri type of variable star which is an young star that hasn't yet entered the main sequence for stars. Imaged over several nights with an Explore Scientific 127 mm refractor and Atik 314l+ mono ccd camera using Clear, Red, Green, and Blue filters. 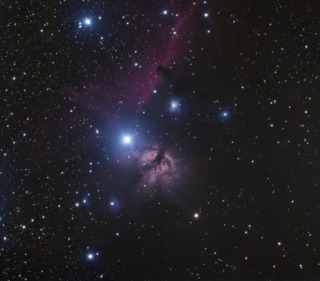 NGC 2024 - Flame Nebula, Barnard 33 - Horse Head Nebula, and the bright star Alnitak that ionizes the Flame causing it to glow. Thicker patches of dust and gas in front of the nebula shows up as the dark patches. The center of the nebula contains a cluster of stars, many newly formed.

The Horse Head Nebula is a dark nebula that lies in front of an area of ionized hydrogen gas that is energized by the star Sigma Orionis. It also is a stellar nursery containing newly and currently forming stars.

Both are part of the Orion Molecular Cloud.

Cropped version as the bright stars in that area causes nice rainbow patterns in my camera. 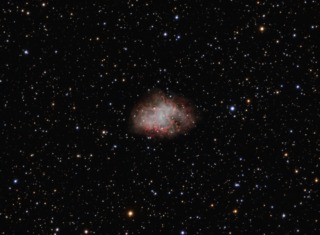 Messier 1 is a supernova remnant located in Taurus. In 1054, Chinese astronomers recorded a bright new star that faded away over time. For awhile it was the 2nd brightest object in the night sky after the Moon shining at a magnitude of -7. Venus on occasions will only make it to around -4,8 magnitude. Independently discovered by Charles Messier while looking for Halley's Comet, it gave him the ideal to record non-moving objects that could be mistaken for comets. It is also called the Crab Nebula because of a drawing William Parsons made that he thought it resembled a crab.

At the heart of the nebula is a pulsar, which is the remains of the progenitor star that collapsed down to a neutron star. The highly magnetized star is spinning around 30 times a second that creates the pulses of radiation. The progenitor star was thought to be between 9 and 11 solar masses, the existing star is around 1.4 to 2 solar masses and is compressed down to a size less that 30 kilometers across. 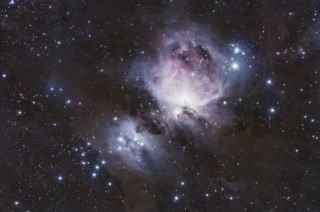 The Orion Nebula or M42 is one of the brightest nebulae in the sky, visible as a "fuzzy" star in Orion's sword hanging from the belt. The Trapezium cluster named for the four brightest OB stars form a trapezoid figure ionizes and illuminates the nebula. The nebula contains hundreds of young stars and more than 700 stars associated with the cluster.